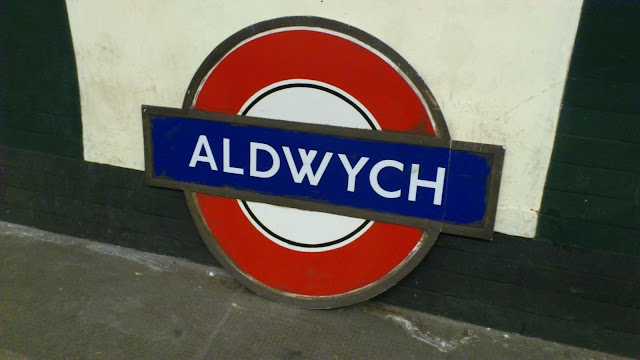 I was lucky enough to get a ticket for one of the London Transport Museum's rare tours of the former Aldwych Tube station, which began today (Friday 25th November).  Located on the Strand near St Clement Danes church, Aldwych stands out with its distinctive Leslie Green frontage of dark red tiles. 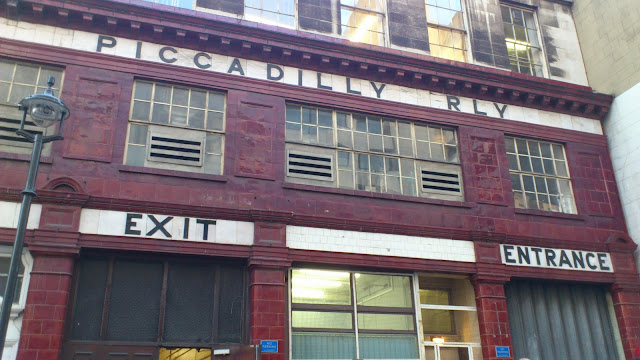 When it first opened in 1907, Strand Station (it was renamed Aldwych in 1915) was the terminus of a short branch of the Piccadilly Line from Holborn.  The 1951 Central London Tube map shown below illustrates where Aldwych lies on the network, showing its relative isolation.

As a result of being at the end of a short branch that, despite a number of plans to extend it to other stations such as Waterloo, terminated in an area already well-served by public transport, Aldwych was never a particularly busy station and within a decade of it opening one of its two platforms was closed to the public.  This disused platform, which shut in 1917, immediately gained another use - housing 300 paintings from the National Gallery that were being kept safe from German Zeppelin raids.  More about the disused platform in a moment.

Moving back to the present day, upon arriving for the tour our group were ushered into the old ticket hall. 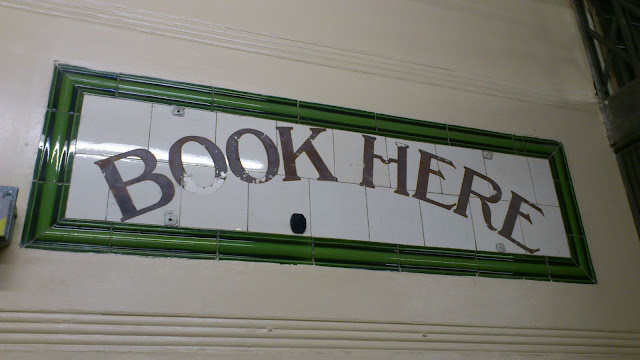 Like other Leslie Green-designed Tube stations, the ticket hall is adorned with distinctive green tiles.  As it was always a quiet station, Aldwych's ticket hall is small and to keep costs down very few staff manned the station - in 1922 the ticket booths were taken out of use and the person manning the lifts also sold the tickets, making Aldwych effectively able to remain open with just one staff member on site (cuts to staff on the Underground network, therefore, are certainly not a new concept).  In the 1980s, a ticket machine was installed.

Aldwych remained open for many years despite its small footfall.  It was considered for closure on a number of occasions but continued to run a peak time only shuttle service from Holborn (this shuttle service was sometimes as small as just one carriage long).  It is estimated that at the time of its closure in 1994 it was serving just 450 passengers per day.  However, its closure was not primarily down to lack of use - by the early 1990s its lifts were approaching 80 years old and were in desperate need of replacement.  This would have cost millions of pounds and it was judged to not be worth it due to small passenger numbers, so the station was closed.

"Disused" is not the word to describe Aldwych, however - although it is no longer a functioning Tube station, it is regularly used by London Underground for training exercises and testing, and also - more famously - as a film set. 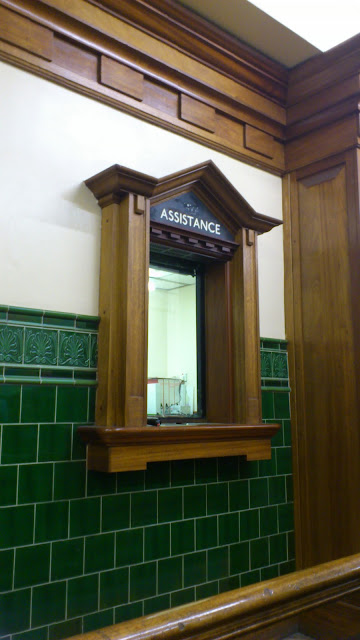 The ticket booth pictured above is not original, neither are the suspiciously pristine tiles - it is a replica that was put in for the purposes of filming.  Many films and television programmes have used Aldwych for filming, including the most recent James Bond film Quantum of Solace, The Battle of Britain, Atonement, 28 Weeks Later and V for Vendetta.  Because the station lies on a short, unused branch it is possible for realistic tube station scenes to be filmed without any disruption to the public transport network.

We were led down a set of spiral stairs, similar to those you might come across at stations like Covent Garden and Gloucester Road.  There are 160 steps down to platform level and after a while I experienced the strange sensation of having to concentrate intensely to remember how to walk down stairs - possibly  a form of vertigo. 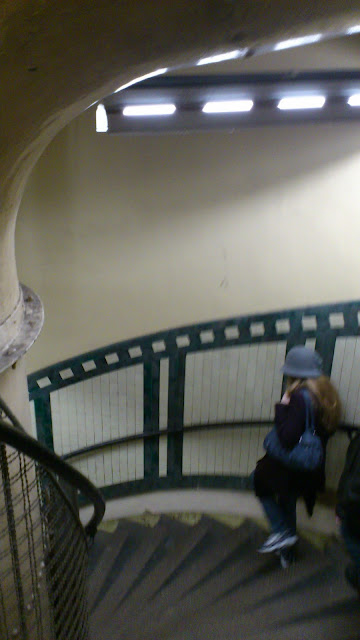 Once we'd reached the bottom of the stairs, we were led through a fairly well-kept, twisting tunnel to the first platform. 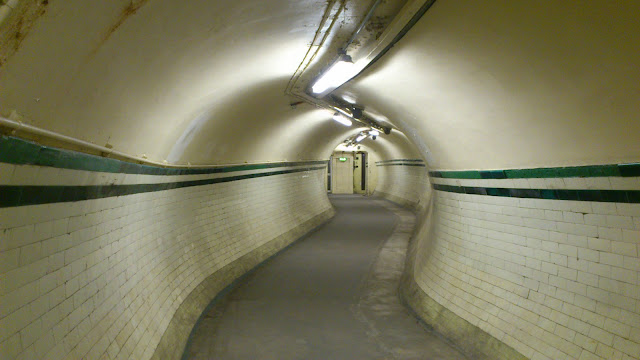 We were directed onto the platform that was used for Piccadilly Line shuttle services until the station closed in 1994.  Our guides led us to one end of the platform, where a volunteer was waiting to tell us more about the history of the station and the trains that served it. 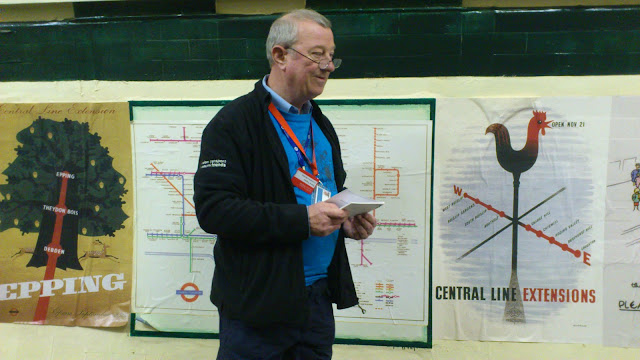 The posters behind the volunteer are not original, but like the replica ticket booth pictured earlier are copies produced for the platform's use as a film set. 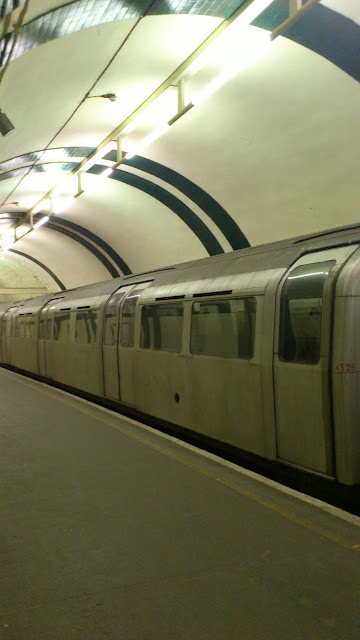 The silver train pictured above is a former Northern Line train that is now based at the station.  As well as for filming purposes, this train is used by London Underground for testing and also emergency drills - as this platform is relatively intact it provides an excellent location for staff training exercises that can take place without having to necessitate closures or disruptions on the main Tube network or having to build an expensive simulated station facility. 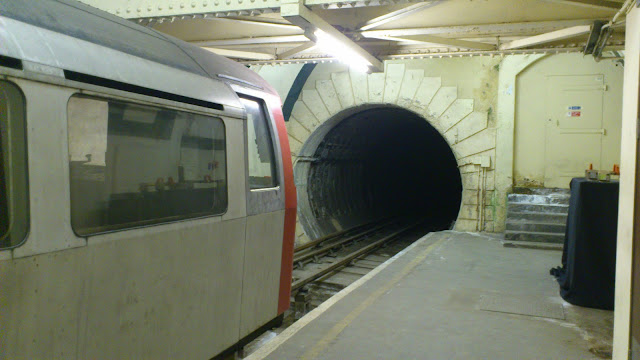 The tunnel to Holborn is still operational and electrified, allowing the old train to be moved out of the station if necessary.

During the Second World War this platform was used as an air raid shelter.  Once again the nature and location of Aldwych made it easily adaptible for other uses - the station was closed to trains in September 1940 and despite it not being located in a residential area, it proved popular as a shelter as it was deep underground.  As its popularity grew it was installed with proper flushing toilets, a canteen and a library, but all the same with up to 3,000 people sheltering there it cannot have been a pleasant, comfortable or sanitary place to hide from the bombs.

The disused platform is a completely different story.  Unlike the easy route to the first platform, the path to the second platform was uneven and damp, with little stalactites dripping from the ceiling. 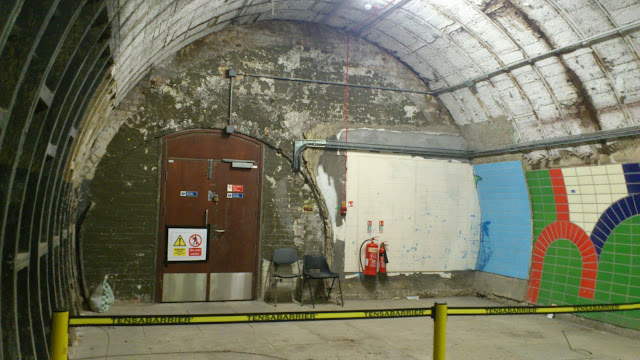 After its closure in 1917, the tunnels at either end of this platform were bricked up, as illustrated above.  Like other disused tube stations, this platform was used for storage.  Probably the most illustrious items stored down here were the Elgin Marbles, which were kept safely guarded underground along with many other treasures from the British Museum in case the museum was hit by bombs. 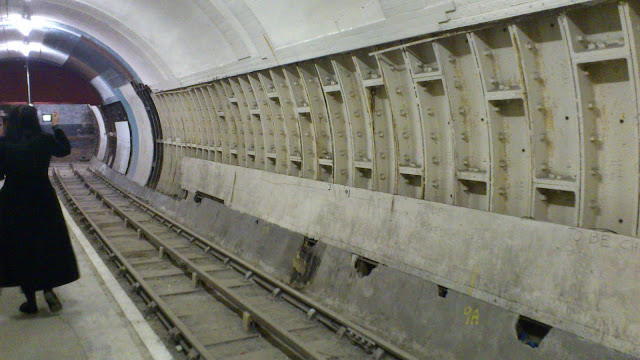 A section of track remains alongside this platform and, as it dates from the station's opening in 1907, is the only remaining example of tube tracks from this period.

This long disused platform shows the signs of many experiments by London Underground over the years - it provided an ideal blank canvas to test out new ideas and materials.  As a result, most of the original Leslie Green tiling is gone, although some of it remains under the many posters that cover the wall. 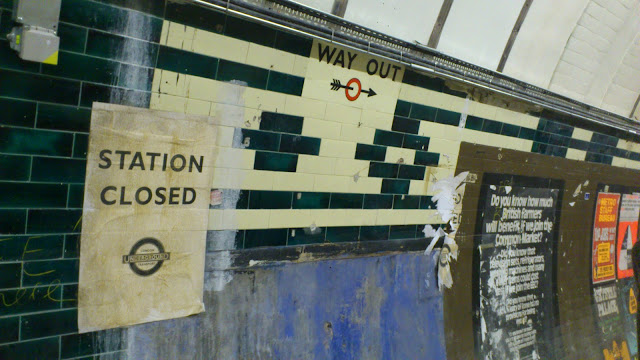 There are also examples of newer tiles being tested on the platform's wall - the red tiles pictured below look as though they were perhaps destined for the Central line. 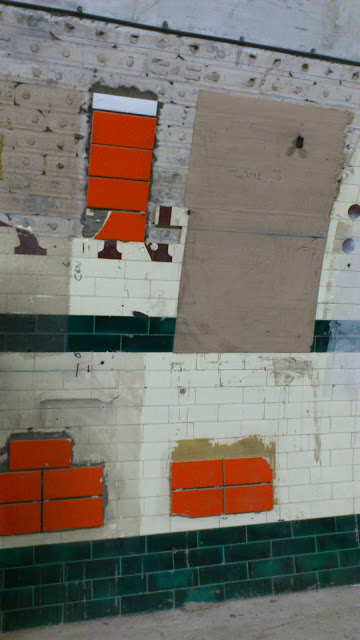 There are a large number of posters dating from the late 1960s or early 1970s on the platform - these were not put in place for filming purposes but to test a new kind of glue for attaching advertisements to the wall in tube stations.  Given that the posters are still here 40 years later, I'd hazard a guess at the glue being a success. 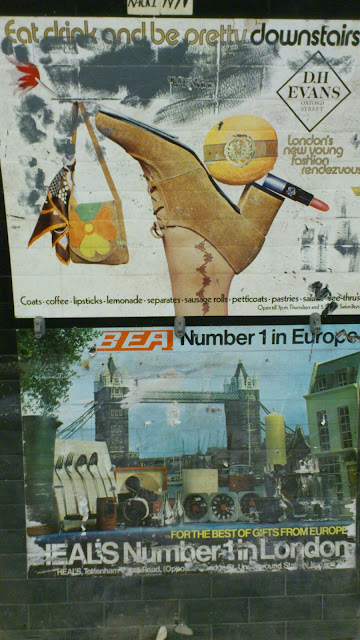 The last part of our tour concerned those pesky lifts, the eventual cause of Aldwych's closure.  The lifts are now the only remaining example of very early lifts from the turn of the century.  There are two lift shafts at Aldwych, but only one was ever used - the way the lifts were designed meant that two lifts shared one shaft. 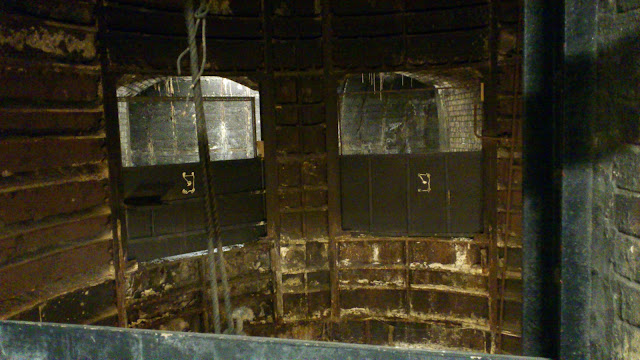 The two lift door frames can clearly be seen on the other side of this lift shaft.  The design of the lifts - two next to each other - was clever as the two lifts had an interconnecting door, which could be utilised in case of an emergency.  If one lift broke down, the second lift could be sent down until it was level with the stricken one, and the door could be opened to allow trapped passengers to transfer to the functioning lift. 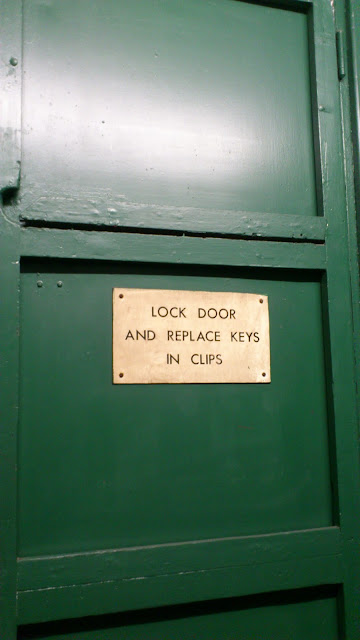 Back at surface level, we were allowed a quick look around the lifts, which are now permanently parked at surface level.  Apart from the interconnecting doors, they are very similar to the big lifts you see at stations like Goodge Street and Covent Garden. 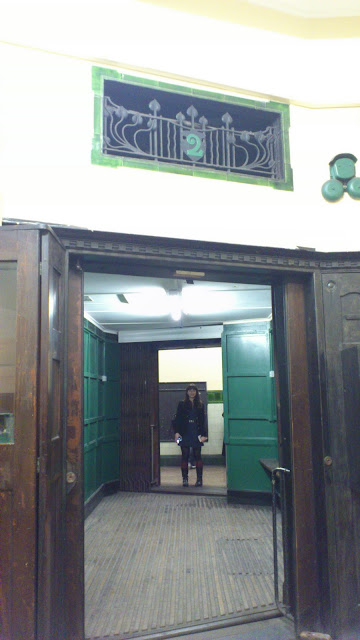 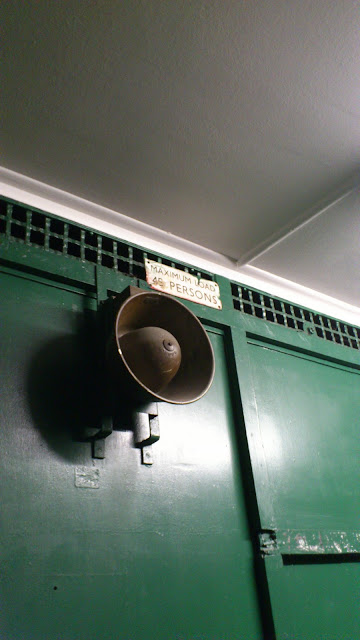 Through the lifts was our exit - we were quickly ushered out to make way for the next tour group. 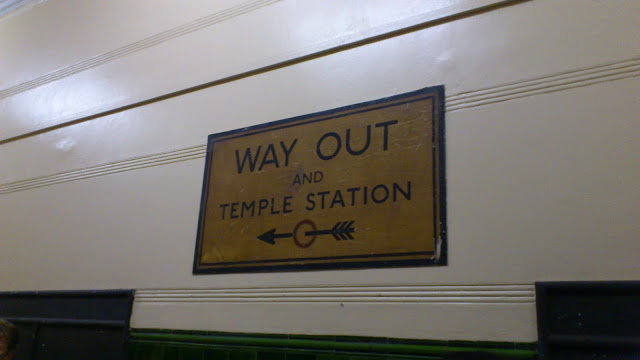 If I'm to be critical, it would be to say that both myself and the friend I went with found the tour to be a bit rushed and short, making the ticket price of £20 seem a bit steep.  We were constantly being hurried along by staff, with little time to ask the volunteers questions, and considering that most of the people on the tour were taking pictures (it's worth mentioning to anyone coming on the tour that DSLR cameras are not permitted), this was a little frustrating.  However, I hope that the large number of tours was down to it being so rare that Aldwych is open to the public, and down to the desire to give as many people as possible the opportunity to visit the station.  It was certainly a treat to get to see it and the volunteers were all friendly and informative.  If you're one of the lucky people to get tickets to go on a tour round the station - enjoy it!
Posted by Caz at 20:50