A rather unusual eulogy on a gravestone in Fulham

The churchyard at All Saints, Fulham deserves an entire blogpost to itself - it's the resting place of many Bishops of London, in their elaborate tombs, and also contains many crumbling and wonderfully morbid 18th Century headstones decorated with skulls and hourglasses.  It's also the location for the scene in the classic horror film The Omen, where Patrick Troughton's priest is impaled by a lightning rod during a storm.


However, whilst exploring this wonderful and incredibly interesting graveyard I came across a headstone that I felt deserved a little blog post of its own.  In many ways it is quite unremarkable - a tall headstone from the early nineteenth century, inscribed with the name of Isabella Murr, a local woman who died in 1829.  Her grieving husband Joseph provided a eulogy that was inscribed on the stone.


Ye who possess the greatest charms of life
A tender friend - a kind indulgent wife
Oh learn their worth! In her beneath this stone
These pleasing attributes together shone
Was not true happiness with them combin'd?
Ask the spoiled being she has left behind

We do not know when the "spoiled being", Joseph Murr, died - the only words on the bottom half of the gravestone are as follows: 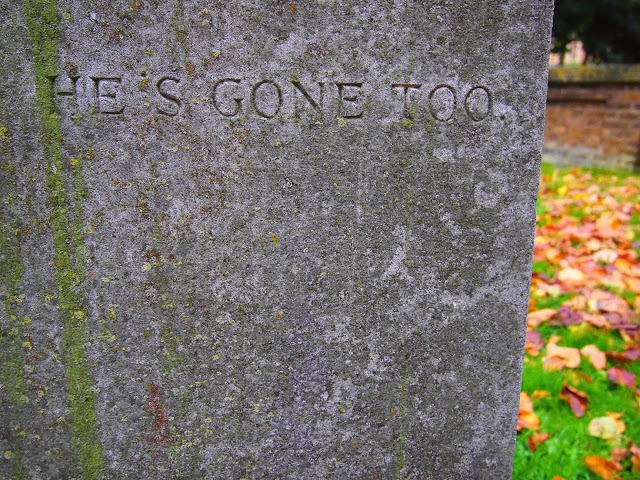 Presumably Joseph, or whoever chose this inscription, had a sense of humour.  It's a rare thing to find in a graveyard, but I am sure that in the 200 years since this stone was placed here, this inscription has raised a few laughs.
Posted by Caz at 21:22 1 comments