The Great Storm of 1703: Eyewitness accounts of the worst storm in England's history

On Monday 28th October 2013, much of southern England woke to howling winds, uprooted trees,  damaged buildings and transport chaos.  The St Jude storm (28th October is the feast day of St Jude, patron saint of hopeless cases) had been forecast, and warnings about its destructive nature widely distributed.  News programmes on the television showed the area of low pressure heading towards the UK, fire brigades used Twitter to give people advice on avoiding damage and loss during the storm, and the hashtag #ukstorm was born.  As the storm blew through and left a trail of fallen trees and damaged property in its wake, the internet buzzed with pictures of damage, eyewitness accounts and updates on travel disruption.  A number of people were tragically killed in England and mainland Europe and parts of the transport network were brought to a near standstill.

In 1703, the people of England did not have such sophisticated methods of forecasting bad weather or of quickly informing the general public of the danger they faced.  And the storm that first hit the British Isles on 24th November 1703 was quite possibly worst ever recorded on these shores, causing enormous death and destruction both on land and at sea - it was estimated that one fifth of the sailors in the Queen's Navy were drowned in the storm.  The storm raged for about a week, reaching a ferocious peak on the night of the 28th/29th November, demolishing buildings, uprooting trees and sinking ships.  Thousands of people died and the Eddystone Lighthouse was swept away. Unsurpringly, in the aftermath of the storm a number of special newspapers and publications appeared carrying information and eyewitness accounts of the storm, making the disaster "national news" in a way that we would recognise today.

The most famous piece of work dealing with the storm - described as "the first substantial work of modern journalism" (source) - was The Storm by Daniel Defoe.  Today, Defoe is most famous for his fictional creation, Robinson Crusoe, but during his lifetime he was a prolific writer of both fiction and non-fiction.  The Storm, published in the summer of 1704, was compiled with the help of the eyewitness accounts of members of the public - an early attempt at crowdsourcing, one could argue.  In the immediate aftermath of the storm Defoe placed advertisements asking for people to send him reports of the storm from their local area.  Around sixty of the accounts Defoe received were subsequently incorporated into the book - providing us with a unique insight into this natural disaster. 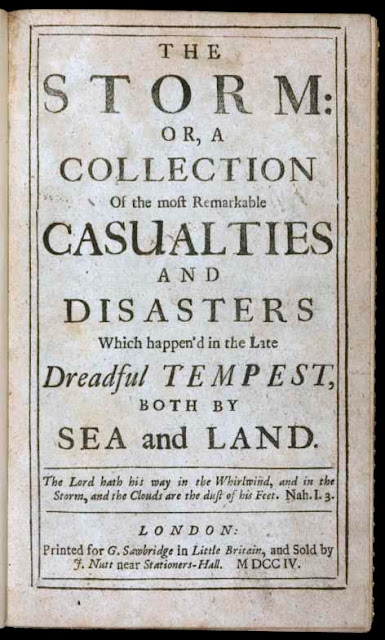 Defoe had witnessed the effects of the storm in London and the surrounding area, but later chapters reproduced letters from members of the public describing the destruction and extraordinary events in their own areas.  Interestingly, a large number of the letters Defoe chose to print were from clergymen or other individuals closely connected with the Church - perhaps the reasoning behind this was that such people were seen to be trustworthy and truthful in their accounts of the storm.

Three gentlemen in Stowmarket, Suffolk, describe in meticulous detail the fine church spire that had been destroyed by the storm, noting its impressive proportions before its destruction and providing an equally detailed description of the damage it sustained.  Mr Joseph Ralton describes what appears to be a tornado, a "spout" in the air, in Berkshire, and mentions the discovery of a man believed to have been "knocked down" by the spout and injured.  Other accounts describe the loss of orchards, crops and livestock - all of which must have had a terrible impact on the affected communities.

The St Jude storm of 2013 has been dubbed "Stormageddon" by some on the internet, mostly due to the level of coverage it received, but this moniker might have been better suited to the events of 1703.  An undertone of supersition and fear of God's judgement runs through many of the accounts, and indeed Defoe chose to include the following quote from the Book of Nahum on the front page of The Storm: "The Lord hath his way in the Whirlwind, and in the Storm, and the Clouds are the dust of his Feet."  Phrases such as "it pleased God to preserve her" are common both in the letters and in Defoe's prose.

However, Defoe also went to great lengths to research possible explanations for the storm - the eighteenth centry did, after all, usher in the Age of Enlightenment, with its emphasis on rational and scientific thought above religion and superstition.  Defoe's work does not succeed in separating religious explanations from scientific ones, but is more an attempt to figure out why and how God would create such a tempest.  The first two chapters of The Storm attempt to explain how storms form, with quotes from "philosophers" (as scientists were then referred to), with an emphasis on previous research that attempted to explain why the British Isles were particularly prone to violent storms.

Defoe's conclusion is ultimately religious in tone, rather than scientific.  "From this I draw only this conclusion, that the winds are a part of the works of God by nature, in which he has been pleased to communicate less of demonstration to us than in other cases; that the particulars more directly lead us to speculations, and refer us to infinite power more than the other parts of nature does."  Although barometers for measuring atmospheric pressure existed at this time - Defoe himself owned one and refers to it in The Storm - science had not yet been able to provide a full explanation of why and how such a powerful and destructive storm had formed.   In the absence of such knowledge, it is understandable that the storm was described as an act of God rather than a meteorological event. 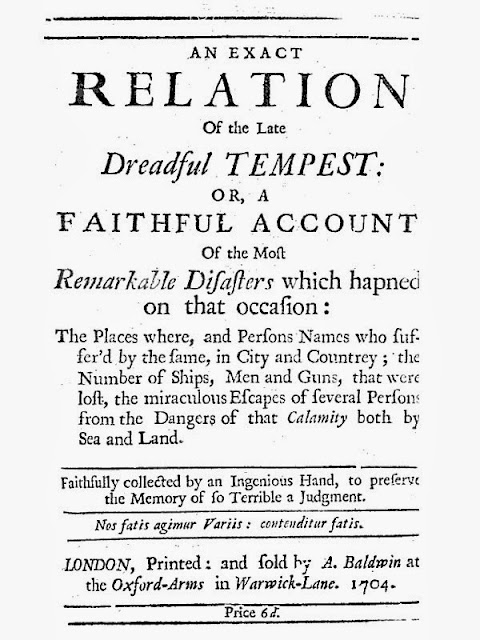 Another written source of eyewitness accounts, An Exact Relation of the Late Dreadful Tempest, was printed in London in 1704 and was "Faithfully collected by an Ingenious Hand, to preserve the Memory of so Terrible a Judgment."  Unlike Defoe's work, this publication does not name its sources (even the author is anonymous), and it is possible that it may have been compiled from earlier news sheets printed in the more immediate aftermath of the storm.  It provides a particularly detailed - and often gruesome - account of the damage wrought in London during the storm, using dramatic language and making frequent references to the wrath of God.  It is a wonderful example of early sensational journalism.

"It was observed by several, that it was mixt with Lightning; and the extraordinary Rumbling, and Noise which was heard in the Air, with the violent Blasts, and Gusts of Wind, resembled the fall and rushing down of Waters with great Impetuosity."

The dramatic escape of Queen Anne and members of her household is recounted, along with a detailed description of the damage to St James' Palace and other buildings around St James' Park, Whitehall and Westminster.  Part of the Tower of London, "which had been very remarkable ever since the Days of King William II", was blown down.  Several hundred boats were damaged, sunk or blown ashore in the area around the Pool of London ( the area immediately downstream from London Bridge), with many people being drowned.

Many Londoners were killed in the storm - from this account it appears that collapsing chimneys and walls were the most common cause of death and serious injury.  Mr Mias, a distiller living near Piccadilly, and his maidservant were killed by a falling chimney, as were two boys sheltering near Hatton Garden.  A number of other people, including a priest and his wife, narrowly escaped the same fate.

Also included is a disturbing account of an infant crushed by a falling chimney while its parents, only a yard or so away, watched in horror.  "From hence we may observe, That even Innocency, in a general Calamity, suffers with the Guilty; and the poor Babe is destroyed by Stroke of Divine Vengeance, whilst the sinful Parents are permitted to stretch out their Lives to a longer Date."  Such comments reinforced the belief that the storm was an act of God.

Not all of the incidents are quite so harrowing, though.  "An Accident, worthy of remembrance, happened to one Mr. Hempson, lying next the Roof in Bell-Savage Inn, near Ludgate-hill; the same being blown down, he was carried to the Ground without any hurt; and, as he declares, knew nothing of the Storm, till he found himself lying on his Bed in the open Street. How extraordinary an Accident was this! And how ought that Gentleman to contemplate and weigh with himself the eminent Danger the Hand of Heaven has preserved him from, when nothing but Death was to be expected!"

These documents provide a valuable insight not just into the events of the storm itself, but also into the fears and superstitions of the people affected by the disaster, and how they attempted to explain such a horrific event, adding a fascinating social history angle to one of the worst natural disasters ever to befall the British Isles.
Posted by Caz at 13:42