Skulls, astrologers and the sands of time: a Georgian graveyard in South West London

One of the best things about living in London is the great potential for discovering wonderful places completely by accident. In this instance, I was required to go to Mortlake to pick up a parcel from the sorting office that had been too big to fit through my letterbox.  Whilst walking up Mortlake High Street my eye was caught by some worn old gravestones peeping out through bushes and shrubs. 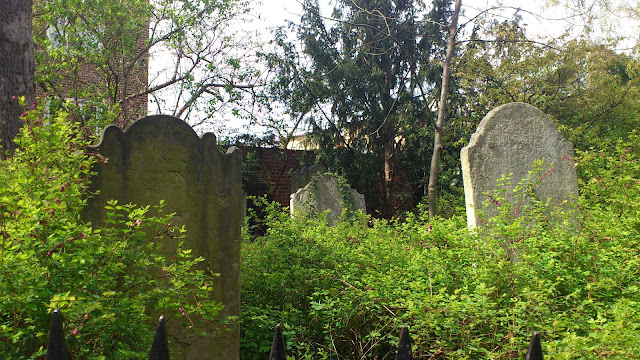 This graveyard belongs to the Anglican church of St Mary the Virgin, pictured below. 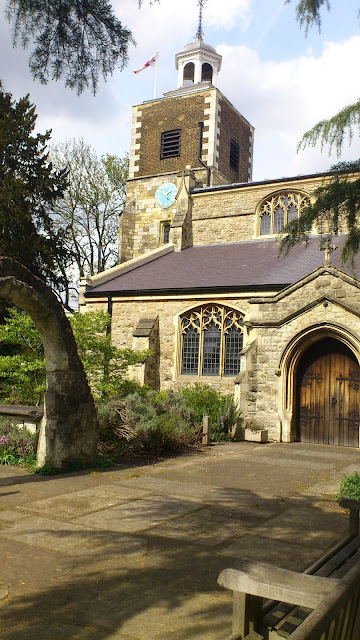 The St Mary's we see today was built in 1543, replacing an earlier church that had been situated nearby.  Only the tower survives from the 16th Century, and major alterations were made to the church in the 19th and 20th Centuries.  The church interior, pictured below, dates from the early 20th Century. 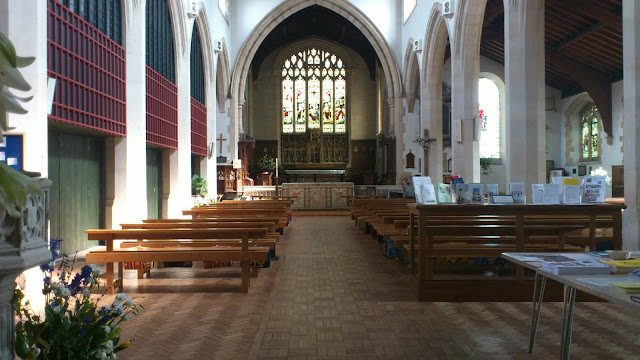 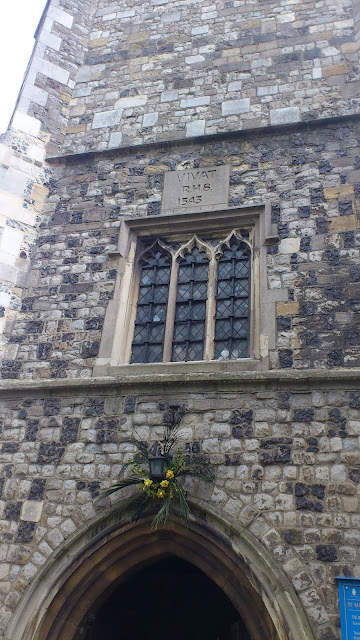 The churchyard, however, mostly contains gravestones from the Georgian period, from about 1715, with the most recent graves dating from the early Victorian period.  The Burials Act of 1851 closed London's ancient churchyards and from then onwards the residents of Mortlake had to be buried elsewhere.

A number of my previous blog posts have focused on 19th Century graveyards, and the funerary symbolism used in this period, much of which invoked Roman urns, clasped hands, broken pillars and extinguished torches.  Many of these symbols had their origins in the Classical period.  Earlier gravestones, however, use different images and probably the most distinctive of these is the skull, or death's head, an obvious signifier of death.  Some more examples of death head symbolism on gravestones can be found here. 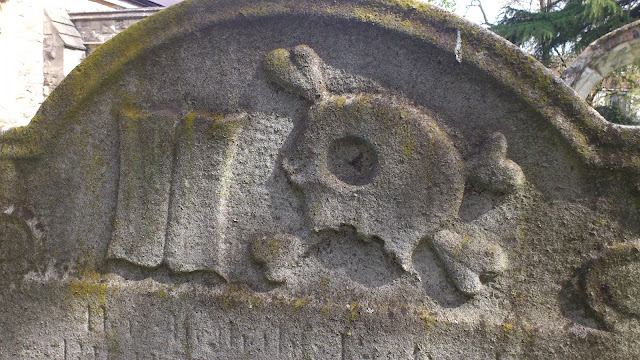 The monument pictured above also depicts what appears to be a book, which may signify knowledge, or perhaps the Bible.


The gravestone pictured above shows another symbol of mortality - the hourglass.

So why are the symbols on 18th Century graves so different to those on Victorian graves?  In the Victorian period death became a money-spinning industry, with grand memorials, specially laid out cemeteries and ostentatious funeral processions becoming popular amongst the moneyed.  Death was dressed up and became an event - look at the way that black mourning clothes and black-edged writing paper became important and very visual parts of mourning.  At the same time, the symbols used to represent death became more distant - no more scary signifiers of mortality such as skulls, bones or ominous signs of time passing.  This in part reflected differing fashions and tastes in the Victorian period, with grand Gothic and Classical images becoming common in the new burial grounds that opened after inner city churchyards were shut.

The poor, of course, continued to be buried in common graves with no memorial or perhaps a small, simple stone.  Dotted around old graveyards are little headstones adorned only with a set of initials and dates of birth and death.  The graves of non-conformist believers have also traditionally been more austere. 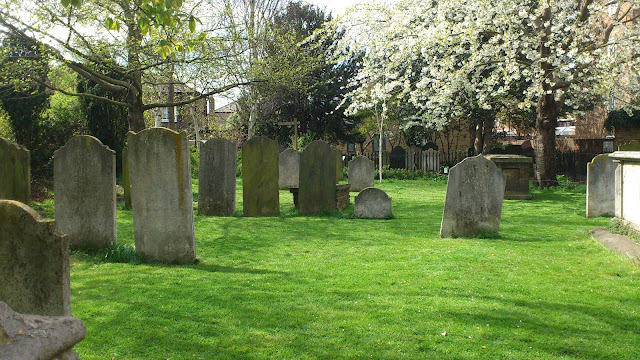 The earliest known tombstone in the graveyard at St Mary's is that of the astrologer John Partridge.  Partridge was born in East Sheen, not far from Mortlake, and after initially starting a career as a shoemaker he studied in Holland and became an astrologer, having learned Latin, Greek and Hebrew.  He wished to see the Arabic influences astrology - which had become widespread in Europe during the Renaissance - removed and sought a return to Ptolemy's principles of astrology.

Although Partridge wrote a number of books of his own, he is best known through the words of his enemies.  A committed Whig and sceptical of the Church, Partridge was known to predict the deaths of those whose opinions on religion and politics he disagreed with.  This made him unpopular, and his astrology was suspected of being quackery.  In 1708 this came to the attention of Jonathan Swift, the Irish cleric best known for writing Gulliver's Travels, and writing under the pseudonym Isaac Bickerstaff Swift mockingly predicted that Partridge would die on 29th March 1708.  On this date, he wrote another letter claiming that Partridge had died.  Partridge, very much alive, angrily refuted the claims but continued to be ridiculed, with Swift commenting that "they were sure no man alive ever to writ such damned stuff as this."  Swift even penned a eulogy for Partridge:

Here five foot deep lyes on his back
A cobbler, starmonger, and quack…
Who to the stars in pure good-will,
Does to his best look upward still.
Weep all you customers that use
His pills, his almanacks or shoes.

Partridge died in 1714 or 1715, and little is known about his final years.  He is buried in the tomb pictured below, very close to the church building. 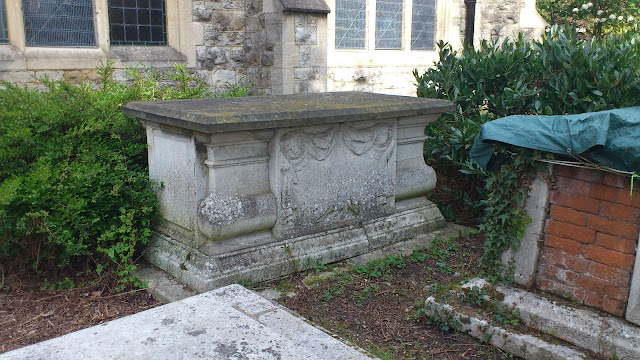 The picture below shows close-up of the cherubs on Partridge's tomb.  A skull is also visible at the bottom of the plaque - it is quite worn and covered in lichen, and its most distinctive features are the eye sockets and nasal cavity.  The large and relatively ornate nature of Partridge's tomb suggests that he either died quite wealthy, or had friends who were able to pay for a grand memorial. 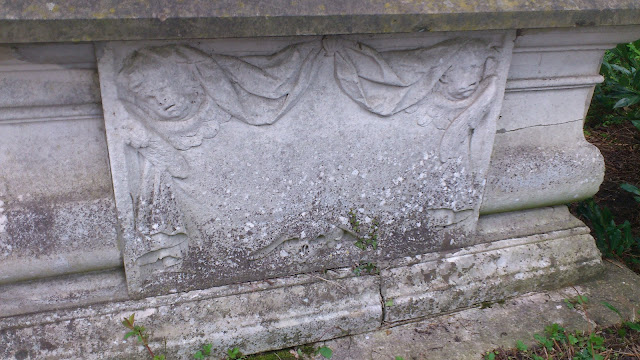 St Mary's also has a connection with the more famous John Dee, the Elizabethan mathematician and magician who had a home in Mortlake close to St Mary's.  During Dee's time the boundaries between mathematics, science and magic were blurred, and - as this was the time before the frenzied witch hunts of the 17th Century - Dee enjoyed the patronage of a number of eminent Elizabethans, and even acted as advisor to Queen Elizabeth herself.   Dee travelled widely during his lifetime and kept his extensive library at his Mortlake home, a library which at the time was reckoned to be one of the greatest in the world.


A history on the church's own website claims that Dee was buried in St Mary's after his death in 1608 or early 1609.  Dee died in poverty and relative obscurity, as James I's regime was unfriendly towards magic, and unfortunately no parish records of his death and burial survive, and there is no known gravestone. 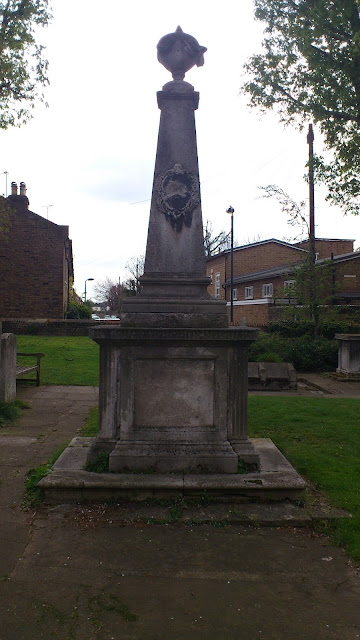 If you look behind this tall monument, a low tomb to the right lies over a former Prime Minister.  (The reason why there isn't a proper picture of this tomb is because I read the little map in the churchyard wrong and took a picture of a different tomb close to that of the former PM.)  Henry Addington, 1st Viscount Sidmouth, was a Tory MP for Devizes and became Prime Minister in 1801 after William Pitt the Younger resigned.  By all accounts Addington was not an effective Prime Minister and he was ousted in 1804.  He did, however, live to the grand old age of 86, dying at the comfortable White Lodge in Richmond. 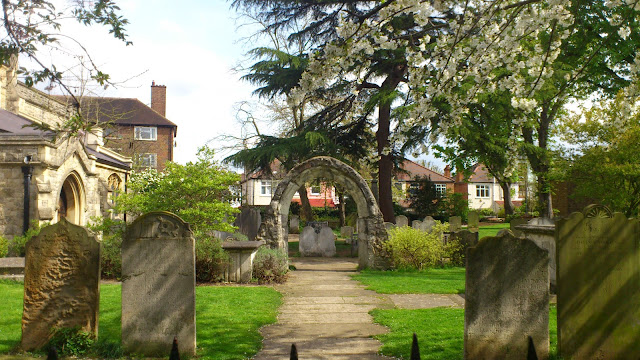 Probably the most distinctive feature of the churchyard is the picturesque archway in the middle.  This archway was originally part of the structure of the church, but was removed during rebuilding work in the 19th century and rebuilt in the churchyard, allegedly at the insistence of a parishoner. 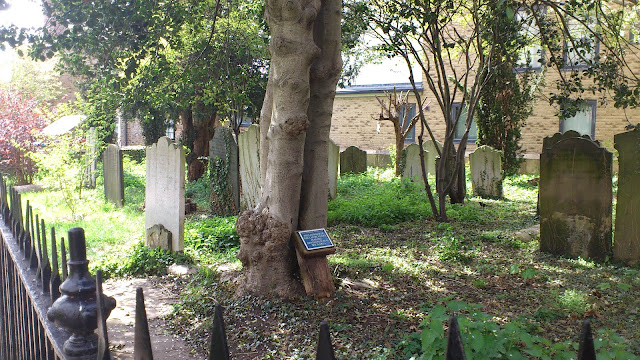 Part of the churchyard is fenced off and designated as a "wild area", allowing plants and habitats for birds and insects to flourish. The whole churchyards is beautifully cared for by the Friends of Mortlake Churchyard, who have lovingly restored the graveyard after it became derelict.  More details about the Friends can be found under the "Churchyard" section of St Mary's website.

There is also a labyrinth on the side of the churchyard closes to Mortlake High Street.  The labyrinth, simply laid out with natural materials, is intended to be a space for quiet reflection.


Finally, a little mystery.  I came across the following stone in the middle of the churchyard but couldn't find any information about it.  I have no idea of its date - it could possibly even be modern - but has anyone got any ideas of what it might symbolise?  My best guess is a green man, or perhaps a stone from the church building before it was restored. 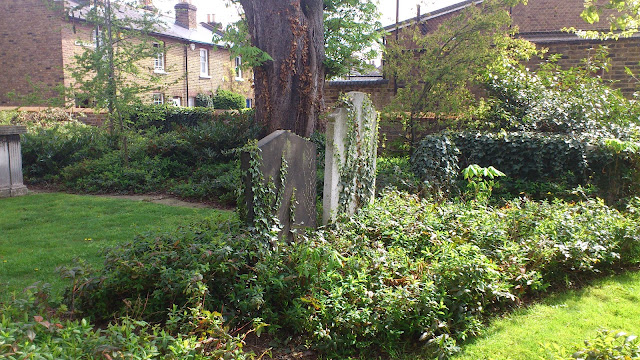 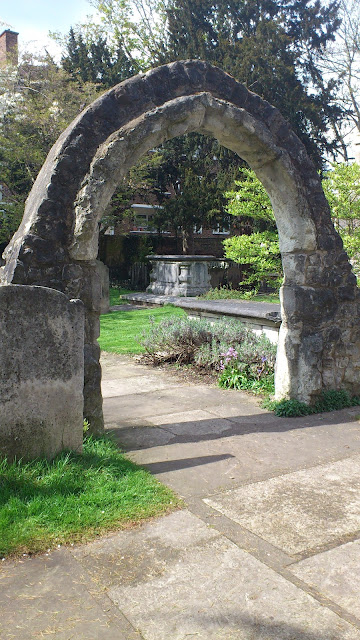 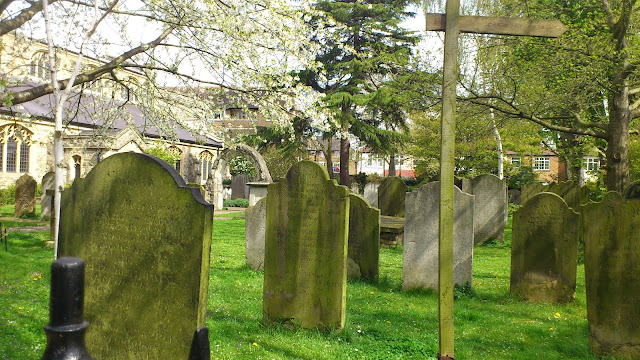 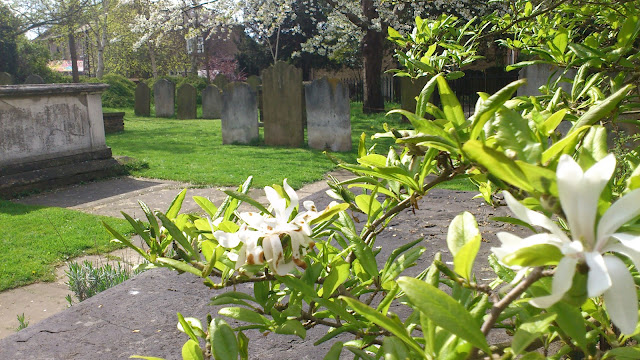 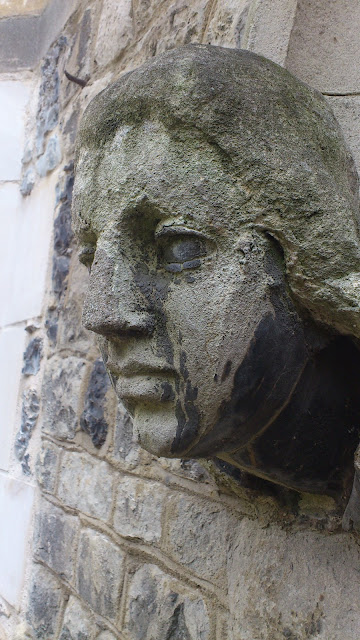 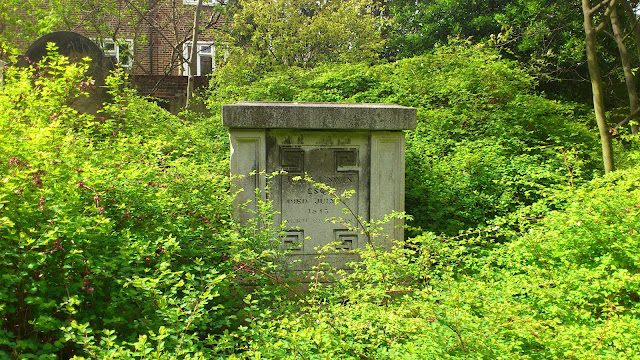 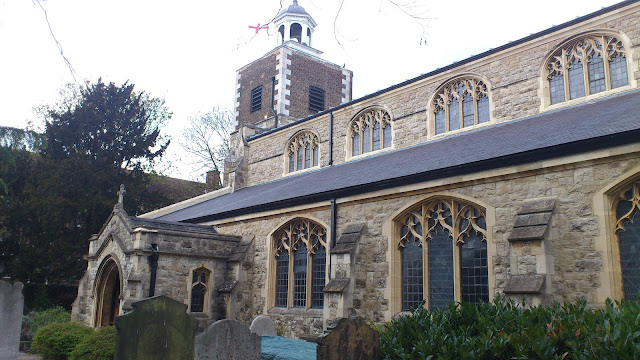 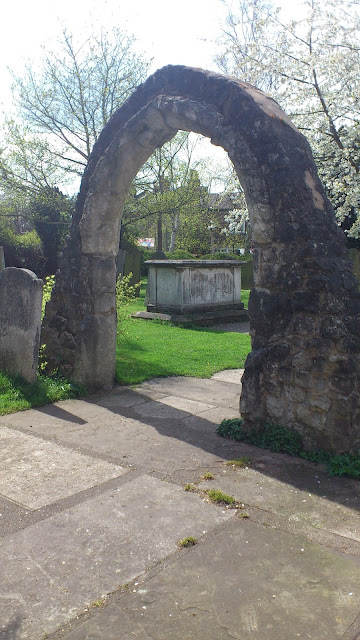 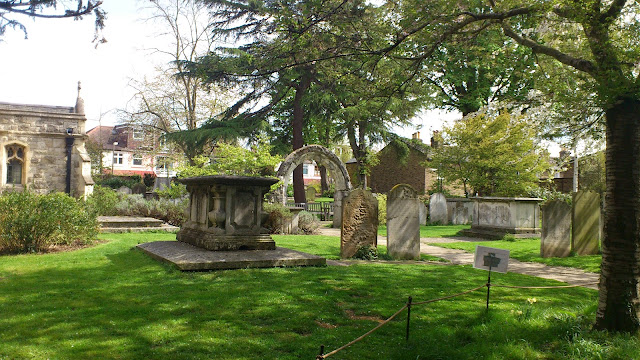