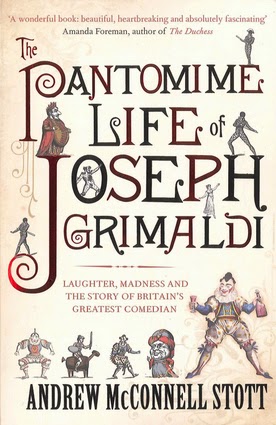 ﻿This book opens with the author, Andrew Stott, observing one of London’s most eccentric sights – the annual memorial service to Joseph Grimaldi held in Holy Trinity Church, Dalston, and attended by dozens of clowns in full regalia.  But who was Joseph Grimaldi?  Born in 1778, he was the first son of Joseph Giuseppe Grimaldi, better known as “the Signor”, an entertainer with a violent, unpredictable streak and an unhealthy obsession with death.

The Signor wished his son to follow in his footsteps onto the stage, and young Joe made his theatre debut as a toddler.  He had a wretched childhood, as the Signor was a domineering and abusive parent, regularly beating Joe (even on stage) and forcing him to train and work for long hours.  Stott shows us the dark side of theatre in this period – the many children working in theatres not only had to work long hours in poor and dangerous conditions, but many were also abused – verbally, physically and sexually.  With this atmosphere of exploitation and violence, it is easy to see why Joe later chose to keep his own son away from the theatre until he was in his late teens.

After the Signor’s death, Joe became the main breadwinner for his family and Stott documents the difficult path Joe took to eventual stardom, eventually making the pantomime role of Clown his own – he expanded the role from a simple buffoon to the clown character that we recognise today, complete with face paint and brightly coloured hair.

Sadly, despite his success on the stage, Joe’s personal life was filled with tragedy, mental illness and disability.  Stott does not seek to retrospectively diagnose Joe with any specific illnesses, but mentions the bouts of melancholy that often struck – ironically – at the times of Joe’s greatest successes.  The physical demands of Joe’s pantomime roles also took their toll, causing him to age prematurely and spend his final years as a cripple.  Stott identifies the contrast between Joe’s stage persona and his personal life as the birth of the idea of the tragic clown.

Stott’s biography not only tells us Joe’s story but also immerses the reader in the colourful, chaotic world of the theatre in the late eighteenth and early nineteenth centuries.  As well as enlightening the reader about pantomime in this period (which was quite different from the pantomimes performed today), Stott includes takes of bankrupt theatre owners, vengeful set builders and a colourful array of actors, singers and acrobats and their exploits.  At times, however, it feels as though this narrative can overwhelm Joe’s story.  Many of the anecdotes are interesting and sometimes hilarious, but at times it can feel difficult to keep up with all the names, theatres and incidents that are described in detail and that are often unrelated to Joe’s life.

This is a minor quibble, however.  The Pantomime Life of Joseph Grimaldi is a fascinating biography, one that will appeal to fans of theatre history and comedy, and even just those interested in the history of London in general.

The Pantomime Life of Joseph Grimaldi: Laughter, Madness and the Story of Britain’s Greatest Comedian, by Andrew McConnell Scott, Canongate Books
Posted by Caz at 13:32 0 comments