The lonesome grave of a travelling labourer

As a native of Lancashire, I returned to my hometown of Preston to visit my family at Christmas, and on a bright Sunday morning I visited the nearby village of Ribchester, probably best known as an old Roman fort.  I often visited this place as a child, as there was (and still is) an excellent children's playground there.  We would also inevitably visit the ruins of the Roman bath house, which were not fenced off and to a small child presented an exciting labyrinth of tumbled stones and low walls to clamber over.  In Roman times, Ribchester was called Bremetenacum Veteranorum - a possible translation of this is "the hilltop settlement of the veterans."  Some ruins of the fort, including the bath house and granaries, can still be seen today, and many buildings in the village have reused Roman stones and columns.


Ribchester is home to the church of St Wilfrid, an ancient church believed to have been founded by St Wilfrid himself in the 7th Century.  St Wilfrid, Bishop of Ripon and Archbishop of York, travelled extensively across the north of England, founding churches and monasteries.  It is possible that a church already existed when St Wilfrid came to Ribchester, but it is thought that St Wilfrid founded the first stone church on the site.  This building was subsquently improved and enlarged between the 11th and 16th centuries. 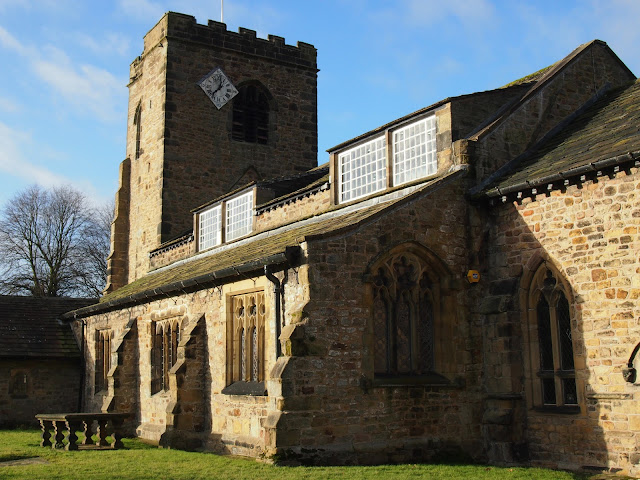 St Wilfrid's is surrounded by a large churchyard, which contains a number of gravestones surviving from pre-Victorian times.  It was while exploring and photographing this churchyard, making the most of the beautiful winter sunlight, that I came across an old headstone standing apart from the others. 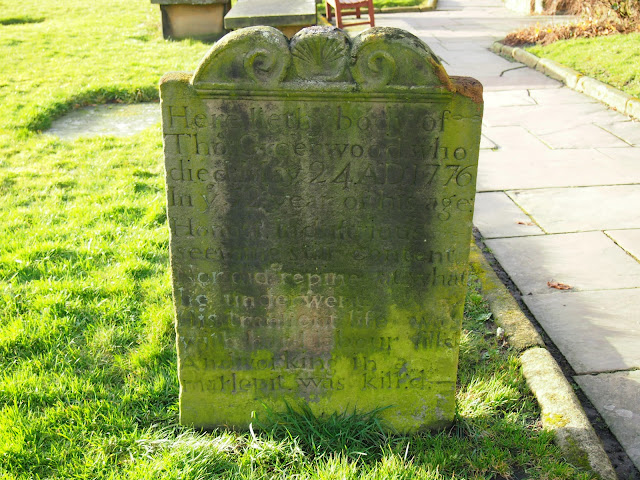 At first glimpse, it's a fairly ordinary 18th Century headstone.  However, when I crouched down to dechiper the inscription, I found that it told rather a sad and poignant story.


Here lieth the body of
Thos. Greenwod who
died May 24 1776
In ye 52 year of his age
Honest, industrious
seeming still content
Nor did repine(?) at what
he underwent
His transient life was
with hard labour fill'd
And working in a
makle(?)pit was kill'd.


So, who was this man?  Parish records show that a "Thos. Greenwood" of Dilworth (a nearby township, now part of the village of Longridge) was buried at St Wilfrid's on 26th May 1776.  Parish records show a Thomas Greenwood, son of another Thomas Greenwood, was baptised in Colne - close to Pendle Hill on the other side of the Ribble Valley - on 13th September 1724.  There is no way of telling if this is the same Thomas Greenwood as the one buried at Ribchester but the dates of the records seem to match up fairly well, if we assume that "in ye 52 year of his age" means that Thomas was 51 when he died.

Records show that Greenwood was a common name in the Ribchester area at the time of Thomas' death, so it is possible that Thomas had relatives in the parish of St Wilfrid's.  As an itinerant worker it is unlikely that Thomas was a wealthy man, so it is likely that his headstone was paid for by others, perhaps relatives or friends from Ribchester.  Certainly the little rhyme on his headstone suggests that he was held in some regard, the eulogy painting him as a noble, tragic figure.

The nature of Thomas' death seems clear - he died in what we'd now call a workplace accident.  But where was he working?  The word on the bottom line of the gravestone is unfamiliar - M-A(?)-T/K-L-E pit.  "Pit" is a good place to start.  There is a long history of quarrying in the Ribble Valley and East Lancashire - in the nineteenth century stone was quarried in large amounts at Longridge Fell, with Longridge stone being used to build - amongst others - the docks at Liverpool and town halls in Preston and Lancaster.  Quarrying also took place in Clitheroe and Rossendale, and at other sites further afield in Lancashire.  Perhaps the mysterious pit where Thomas met his death was some kind of quarry.  If he lived at Dilworth at the time of his death he may have been working on nearby Longridge Fell.

The "transient life with hard labour fill'd" that Thomas led is another pointer that could suggest that some of his work at least involved quarrying.  Before the Industrial Revolution quarrying in Lancashire was carried out on a relatively small scale, with most stone being quarried to meet local demand.  This "on-demand" feature of quarrying would probably have created a situation where quarry workers would travel around the area, moving to where the work was and moving on when a job was finished.  Was this how Thomas lived his life, moving between quarrying jobs in rural Lancashire?

Another possiblilty is that Thomas was a miner - another tough, physical occupation.  The ambiguous word on the gravestone may be an old spelling of metal.  Lead mining took place in East Lancashire in the 18th Century, on a small scale (source).  It was never particularly succcessful.  Perhaps Thomas was involved in one of those ventures, and died in a mining accident. 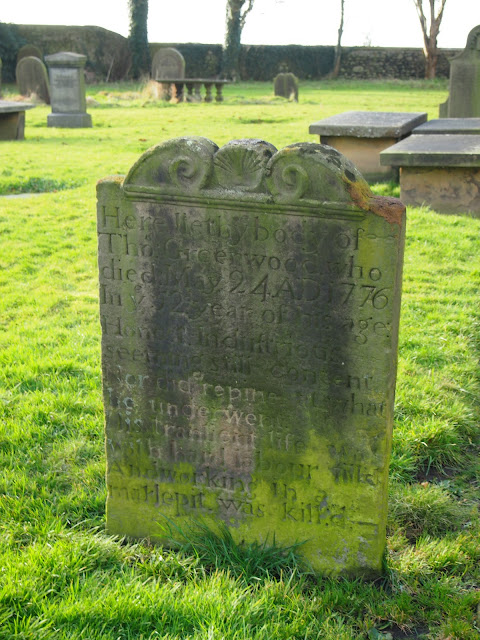 All of this is speculation, of course. How much can we really know about a person, when scant records only tell us when they were baptised and when they were buried?  It is possible that no other written records of Thomas Greenwood exist or survive.  The only thing we know definite is the record of his burial at St Wilfrid's.  The Thomas Greenwood baptised in Colne in 1724 may have been someone else altogether - we just don't know.

Interestingly this is one of the few older gravestones that remains in the churchyard.  If at some point  old gravestones were removed (this is likely, as old graves were often reused), it's possible that Thomas' gravestone was kept because of its poignant, rhyming eulogy.  The older part of the churchyard, seen behind Thomas' grave in the photograph above, has few gravestones compared to the Victorian and later sections.

It's humbling to think that if this headstone with its rhyming eulogy had never been created, or had been disposed of, Thomas Greenwood would be completely forgotten, anonymous bones in an unmarked grave.  Research and speculation paints a vague but poignant story of a hard life and a sad death.  The presence of the gravestone points to the likelihood that someone cared enough about Thomas to erect a memorial and write a eulogy.  The continued existence of the gravestone suggests that at some stage, someone might have been moved enough by the story it told to leave it in place.

An ordinary gravestone: the stories it can tell, or inspire. 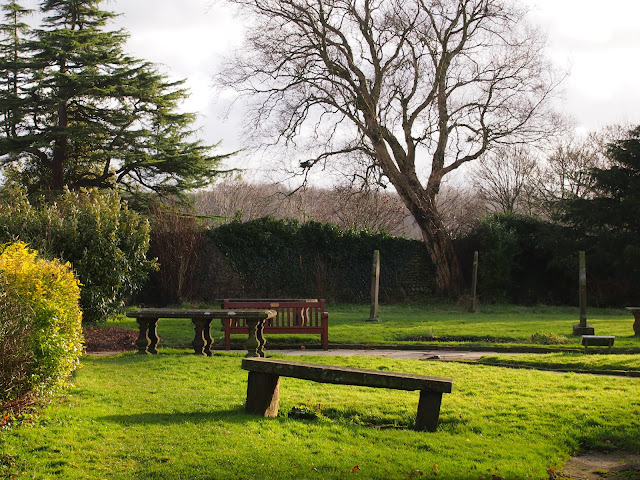 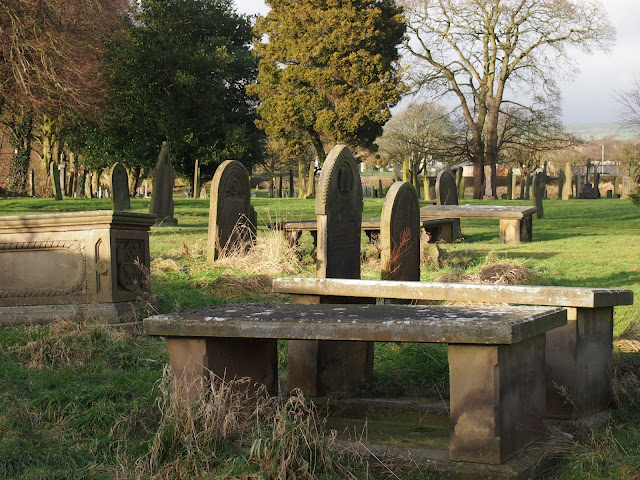 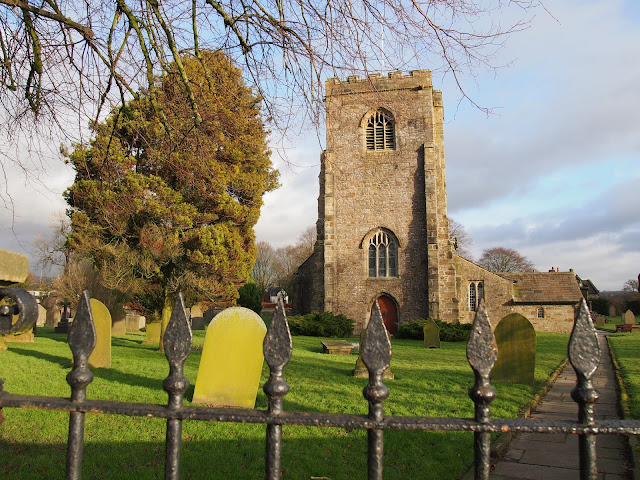